Call back service
IN YOUR LANGUAGE

Newsletter
Register for our newsletter

We handed over the donation from the Sports Challenge

Together with our marketing partner Illusion Factory, we organised a sports challenge for a good cause.

The goal was to collect as many sports minutes as possible. These were then divided by the total number of participants and the team with the most average hours won and decided which organisation the winner would donate to.

The total of all sports hours was then multiplied by € 1.00 to determine the donation amount.

Team Illusion won by a narrow margin and the "internal" winner Julia Müller was allowed to decide where the donation would go.

The donation will go to the Rhine-Sieg Outpatient Children's and Youth Hospice Service. As part of the German Children's Hospice Association, the hospice accompanies and supports children, adolescents and young adults with a life-shortening illness as well as their families.

The German Children's Hospice Association itself, as a nationwide professional organisation, is concerned with strengthening children's and young people's hospice work and its structures. In addition, it raises public awareness of the dying and death of children, adolescents and young adults with a life-shortening illness.

We are happy to support the hospice with our campaign! 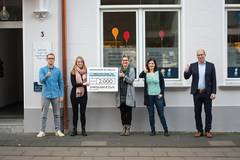